Get Funky With The Panther Touch

The Pink Panther is an icon of mid-century, American animation. He was originally animated by the exceptional animation studio, DePatie-Freleng Enterprises–so bringing such a classic character like this into the modern era was a childhood dream come true. Not to mention a delicate feat that calls for a certain type of skill.

It’s one thing to animate a world renowned character, but it’s an entirely different thing to make that character perform—let alone dance and fight—in a completely new way. And do so in a manner that marries several different mediums together without seams.

Doner initially approached Blind with two scripts built upon the premise of the Pink Panther embodying the Owens Corning product (pink insulation and roof shingles). In one scene he’s guarding the roof from nasty weather, while in the other he struts through a home, á la Soul Train, leaving the residence comfy and well insulated. 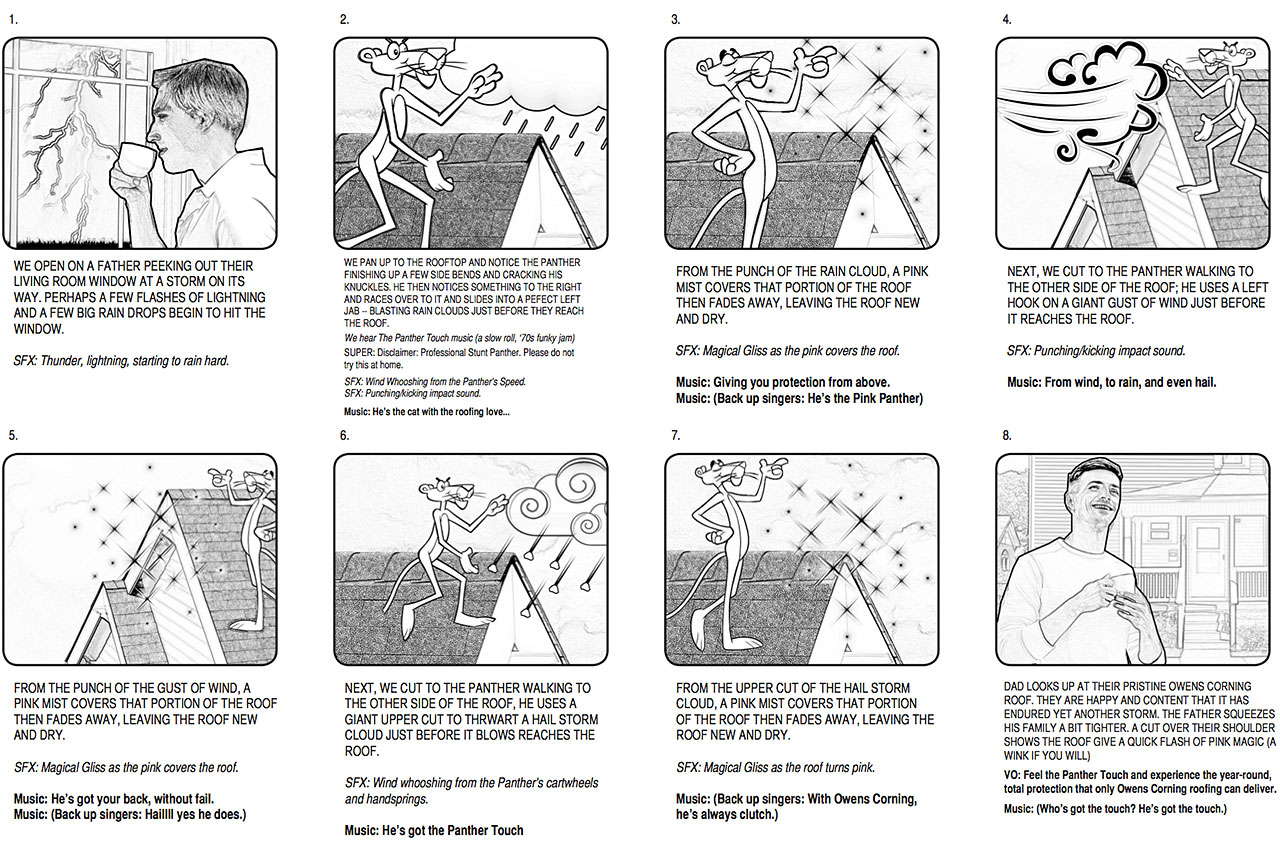 Original agency boards for “The Projector”

After reading the scripts and speaking with the agency, we immediately saw an opportunity to make something special. Each spot had a clear goal and was ripe with delightful moments for animation. The Protector called for the Pink Panther to act as roof protection while The Insulator was more about creating a sense of comfort via temperature. In both cases, the panther needed to perform in the only way he knows how–with effortless style and swagger.

To kickstart the process, we began storyboarding fight sequences, dance choreography and cinematic ways to frame the action. 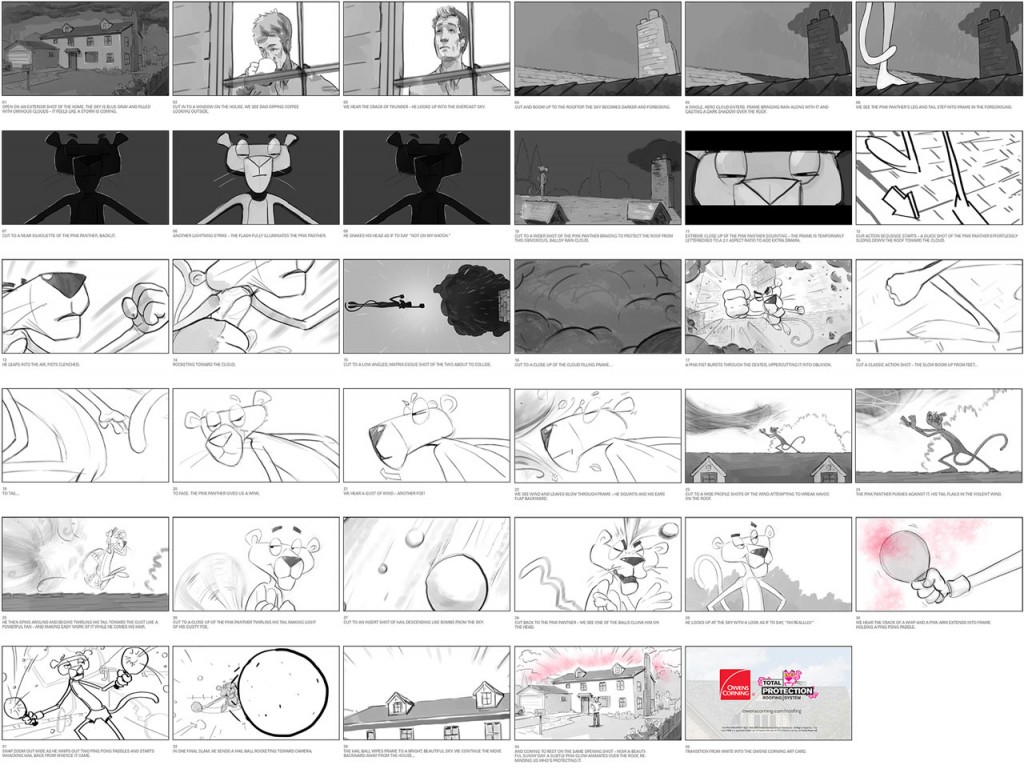 Storyboards for “The Projector”

With the narrative in place, it was time to develop the look. The general visual direction was that the Pink Panther (and his pink “magic”) needed to be fully integrated into reality—as if we had captured him in-camera with everything else.

With a high-profile, animated character like this, one must use great care when manipulating it. The challenge was to find a visually pleasing way to composite the Pink Panther into each scene without losing his inherent cartoon appeal.

Scene from "The Projector"

Below are a few styleframes we created early on in the design process to understand how he would sit in different locations under various types of light.

Both stories hinged largely on the performance of the Pink Panther. Whether he was battling it out against mother nature or unleashing funky footwork, our character team spent plenty of time thinking through the panther’s physicality, inventing fun ways to get him moving. 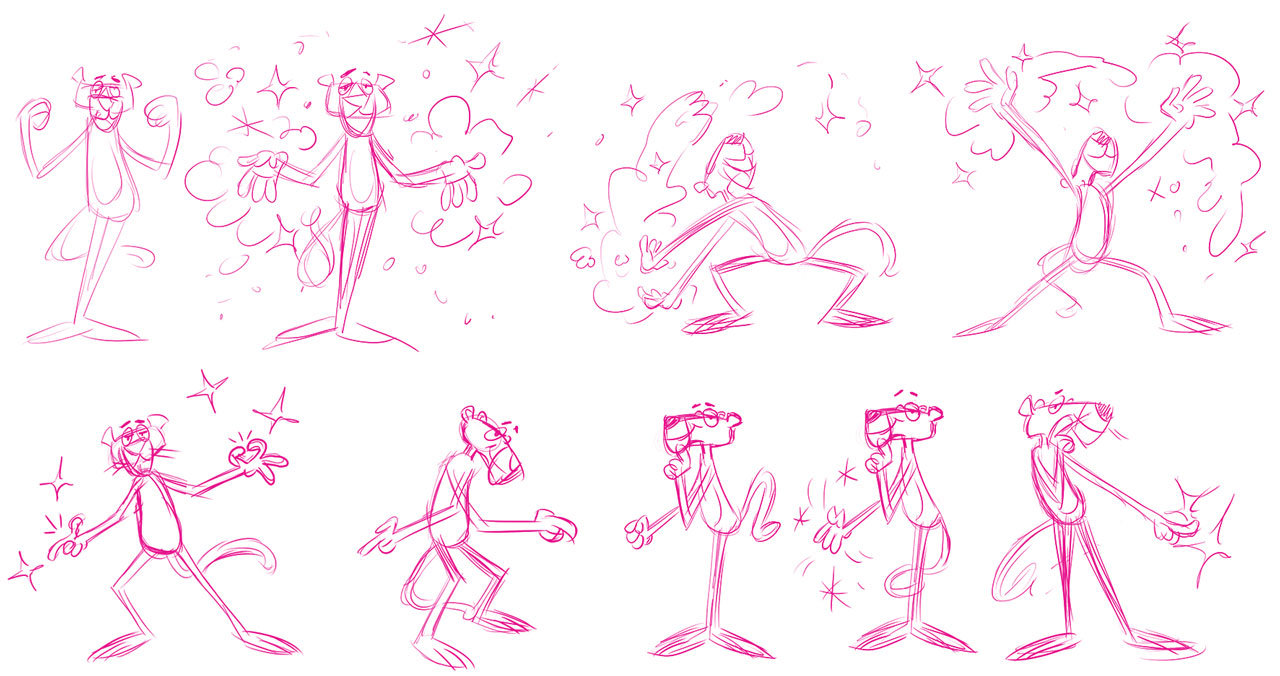 One of the biggest challenges we encountered was keeping the Pink Panther on model. We’ll just say it—he’s a weird shape. And in terms of drawing, his head and snout are tough to get right.

Drawing characters like this takes lots of practice and experience to nail, but lucky for us, we had MGM (the folks who own the Pink Panther) on our side to help guide us through the process. And over the course of the project we got the hang of it.

Working in advertising—especially in the motion/vfx realm—equips you with the tools necessary to manage the most demanding and complex projects. In this case, we were tasked with creating a photorealistic world for the panther to interact with. Shooting on location makes the most sense, but what if you don’t have the means (see: $$$) to get a crane on the roof?

Our production methodology called for a combination of techniques to create a house (both interior and exterior) that looked convincingly real while allowing us to move the camera anywhere, any time. Here’s how we approached it.

First, we shot all talent and major props on stage, keeping location costs way down. While the live action production was moving, our design team took to the streets to photograph exterior reference for houses, yards and foliage furnishings. We then used these assets to create a series of matte paintings that would serve as the base for our sets.

By limiting the amount of CG, we were able to keep costs at a reasonable level and still capture the realism we were after. To keep on schedule, we employed the help of feature film wizards, Crazy Horse Effects, to build a handful of the scenes using our initial design direction.

To recap, we were given a design problem: how do we bring a classic cartoon character into the modern era in a way that feels authentic? Furthermore, how do we do that in a big way, with lots of production value that won’t break the bank?

Final sequence from “The Insulator”

At the end of the day Blind owned this challenge and brought together the smartest and most talented folks we know to deliver what we promised. With fantastic partners like Doner, Owens Corning and MGM on our team, we were able to give the Pink Panther a show stopping re-introduction to the world. And judging by our delightful experience with everyone, we’d call it a success. 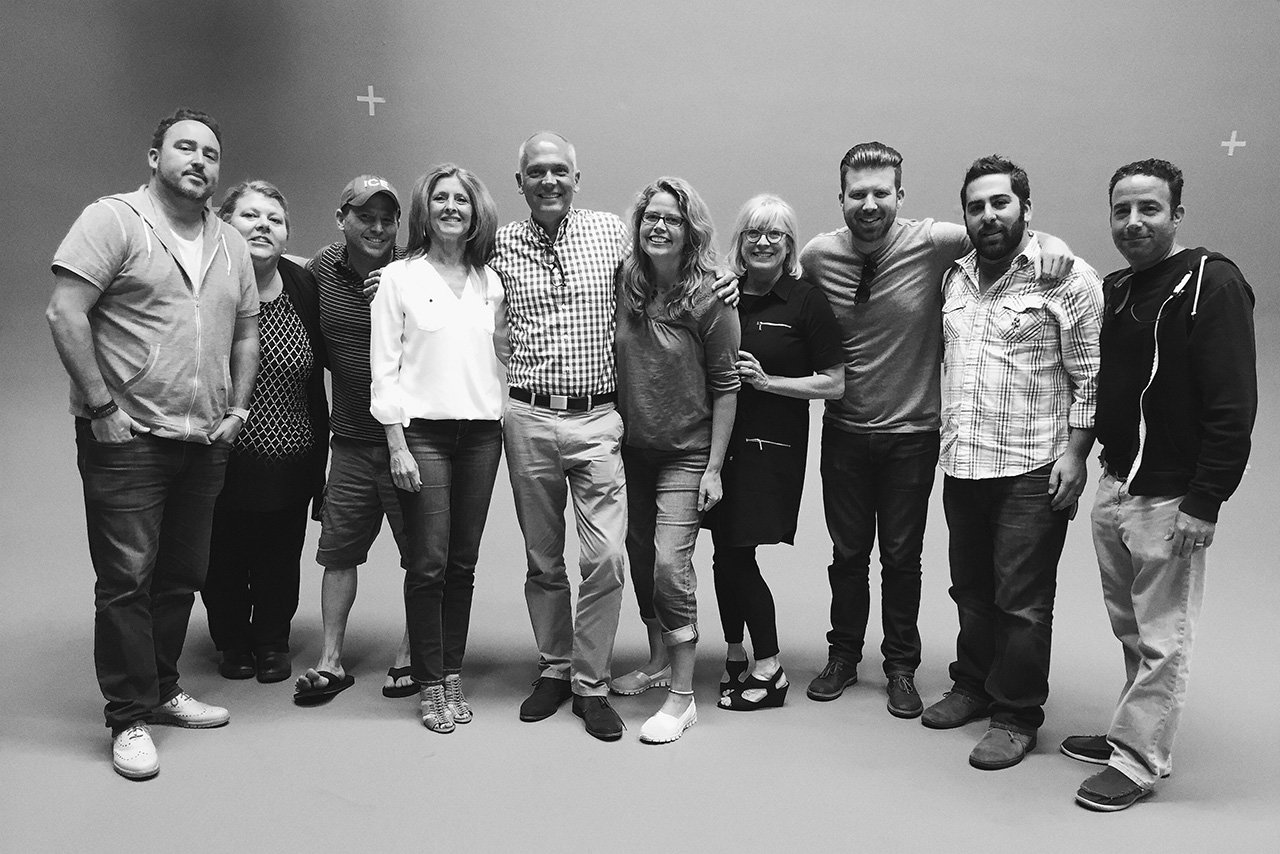